In 1985, Custom Cable Assemblies, Inc. (CCA) was established in the state of New York by Mr. and Mrs. Joseph Di Diego.  Joe received his bachelor degree from Hofstra University on Long Island, NY and has continued his education at several other institutions. Joe grew up learning about electronics through his father, Mario Di Diego.  Mario was an electronics engineer on Long Island, NY for many years.

October 1989, Joe brought CCA to Warner Robins, Georgia and by January 1990, CCA incorporated as a Georgia Company.  With only three employees, the company became successful.  In 1997, CCA built a 3500 sq ft building with 5 full time employees.

Early in his career, Joe worked in the medical field for a number of years.  After continuing his education, Joe worked in Information Technology. In 1984 Joe had an opportunity to work in the RF and microwave cable industry.  Joe's understandings of electronics from his upbringing and his natural ability to figure out how things work made him realize that the RF, microwave industry was a good fit for him.  In 1985, Joseph Di Diego incorporated and started Custom Cable Assemblies, Inc., New York. (CCA). 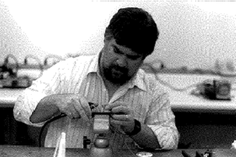 An opportunity to advance in the RF and microwave cable business came up in 1989 in Warner Robins, Georgia.  Warner Robins is the home of Robins Air Force Base.  RAFB potentially had a tremendous amount of work that CCA was fully capable and qualified to do, however Sam Nunn, Georgia State Representative at the time, worked to keep Georgia’s jobs and money in Georgia.

Together, Joe and Anthony, along with the CCA team, have continued to offer quality custom made cables to fit the customer’s needs, with a quick turnaround and no minimum quantity on orders.

Request A Quote
View on Mobile